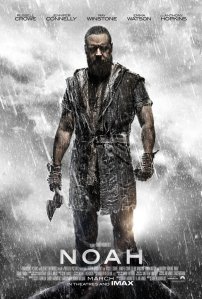 I remember actually enjoying certain Biblical stories as a child. My favourite was an illustrated version of Samson, which I guess technically makes him my first superhero. Hollywood once knew why the Bible was perfect for the screen, and Aronofsky is apparently the one to remind them, which he undeniably does.

The traditional story of Noah is adapted and embellished in the film, titled simply Noah. The trailer hints at a lot of the additions, but I still wasn’t prepared for how original the story looked. The rock-angels are probably the biggest surprise. Fallen angels who turn to stone upon impact, they now wander the earth being bitter about their decision to help humanity. Noah and his family are far more complex than I expected as well. This isn’t so much a story about saving the animals or surviving the flood, it’s about one man’s struggle with interpreting the Creator’s will, how his family deal with his conviction, and humanity’s capacity for good.

Russell Crowe is really great in this film, and I don’t think anyone could have managed to say those lines without it sounding at least a little bit pompous. When he does it, it’s still over-the-top, but in a way you accept in the movie’s world. The big surprised came with the two female characters. Emma Watson and Jennifer Connelly both shine as the women who question Noah’s interpretation of the Creator’s will. It’s an emotional ride. The film turns on the hero over halfway through the film, and the whole thing takes an unexpected turn. It’s a story a lot of us have heard all our lives, but with Aronofsky’s vision, it’s new.

There are other parts that, while also new to the story of Noah, don’t add much. I found the villain, while well-acted, to be a bit predictable. He was just so very, very evil. The meat-eater against the vegetarian. Most of the fight scenes are amazing to look at, like the rest of the film, but they don’t add much to the emotional impact of the story. We all know Noah has to get on the boat. By the end, the last fight scene felt like a punch-by-numbers in any Hollywood blockbuster.

Aronofsky has made something incredibly unique with Noah, and I did enjoy myself a hell of a lot more than expected. It’s visually stunning, emotionally surprising and well-acted. I won’t say it entertained me completely, however. The predictable end to the villain, and the story with the youngest son wasn’t as interesting as it wanted to be, and didn’t have the same punch as the rest of the film. For a film that’s been more talked about before it got released than after, I’m still massively surprised it surpassed my expectations.