We are no longer in a “superhero movie age” I think. It no longer feels like a trend. People have been predicting the death of the genre for years, without a single dent in any box office to back it up. Maybe, in a post-apocalyptic future, people will tire of shadow puppets with tiny shields and hammers. For now, the premise “superhero” is simply a storytelling device in any filmmaker’s toolbox. It’s a genre of speculative fiction that is so popular it requires a great deal of creativity to make something new and interesting.

The Boys from Amazon tries to say something about our obsession with the superhero. It’s dark, comedic, well-acted and at times insightful. It’s really fun, and I binged hard. But it also does not provide any meaningful comment about my obsession. For let’s be clear, I am part of the problem. Had superheroes existed in our universe as in The Boys, my apartment would have been decorated in The Seven kitsch.

END_OF_DOCUMENT_TOKEN_TO_BE_REPLACED

In short: a worthy end to an era.

END_OF_DOCUMENT_TOKEN_TO_BE_REPLACED

Nickelodeon’s programming shaped much of my childhood, and Sabrina the Teenage Witch was probably one of my favourites. The new incarnation of Sabrina on Netflix borrows much more from the current trend of gothic teenage dramas like Riverdale, The Vampire Diaries, and countless others by this point. It’s a beautifully produced, creepy/fun show. Some of the characters are delightful.

The Spellman sisters (Miranda Otto and Lucy Davies) and their niece Sabrina (Kiernan Shipka) prepare for her dark baptism into the Church of the Night. This is proper New England witch craft, with witches’ marks, familiars, and the goat-headed devil. The witches receive “delicious” gifts from the Dark Lord in return for signing their name in the Book of the Beast. A reference to the fantastic movie The Witch (2015), perhaps?

Spoilers ahead for the first five episodes.

END_OF_DOCUMENT_TOKEN_TO_BE_REPLACED

Solo, a beverage and a man. A man who was given his iconic name not through simply being Han Solo, but because an Imperial bureaucrat lacked imagination. Solo, the delicious Norwegian soda, was famously the drink that only did one thing: satisfy your thirst. Solo, a Star Wars story, does not satisfy. Solo, the heist/adventure movie, manages a soft “meh.” This angered me more than I expected as I left the cinema. I’m usually not one to care that much. What struck me constantly during the film was how little I cared for anything. Let’s try to find out why, shall we?

Han Solo is the quintessential rogue character. What satisfies me about his character will not be the same thing that does it for you. My main concern is what can his origin story even be when the ending must birth the character we all hold so dear? The task seems impossible.

This review contains all the spoilers

END_OF_DOCUMENT_TOKEN_TO_BE_REPLACED 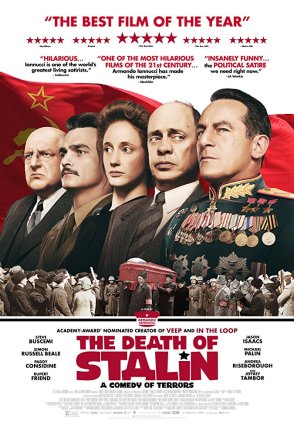 What is the difference, if any, between laughing at the absurd death of a dictator who killed around 60 million people, and laughing at one who killed anywhere from 9 to 50 million people? The numbers are impossible to verify, the suffering is impossible to quantify, but yet one is decidedly easier to laugh at than the other. From The Great Dictator (1940), through springtime to Tarantino’s Basterds (2009), I have had little self-reflection about separating laughter and sorrow at the events. In fact countless comedies are set within the horrific events of WW2, one even inside a concentration camp.

There are not as many mainstream comedies set in Stalin’s Russia, despite the fact that many non-Russian film-makers love to interpret Russian life, music and literature for their own audiences. We have countless western versions of War & Peace, to name just one. What makes one dictator more meme-friendly than another? Not a question I can answer here, but it’s an interesting thought that The Death of Stalin (2018) put in my head. There is no Stalinesque equivalent of Hitler reacting to his xbox account getting suspended. There is no Stalin singing “I’m so ronry” in puppet form. Yet, you have to admit he has the numbers too, as Eddie Izzard once noted.

You may feel all of these examples are in poor taste, and shouldn’t be laughed at. But I have, without much thought as to why I felt that’s ok. So this review of The Death of Stalin (2018) is going to be part review and part me figuring out why it’s uncomfortable even as I roll with laughter.

END_OF_DOCUMENT_TOKEN_TO_BE_REPLACED

Reading the novel by Ernest Cline felt a bit like watching an episode of The Big Bang Theory – not necessarily in a bad way, but more in the way that I wasn’t exactly sure who the book is written for. The book is, at first glance, for young and old geeks who like geeky things and aren’t opposed to a bit of pulp in their fiction. That’s definitely me! But at the end of the book, I didn’t really feel anything, and it had not felt like an adventure. Maybe I’m just not of a “good enough” nerd, you might say. If you do feel inclined to say that, maybe the book’s for you.

The film, on the other hand, does away with a lot of the American Psycho-esque listing of esoteric knowledge and keeps the story grounded much more in reality, both in the reality of the characters and the reality of, well, actual reality.

END_OF_DOCUMENT_TOKEN_TO_BE_REPLACED

We waited until Boxing Day to see The Last Jedi, but long before that I had heard – or rather felt – disturbing rumours. I’ve yet to read other reviews, so I am still not quite sure what people are all up in arms about. This review might not touch on any of the so-called “issues” people had with the film. I can see that some might find a few things hard to swallow, but this review has a lot of stuff to talk about, so I’ll save the in-depth discussion of Luke for another time. Let’s get into it.

END_OF_DOCUMENT_TOKEN_TO_BE_REPLACED

When choosing which movie to see last weekend there wasn’t really a debate. Above the cinema, and on every other bus in town, was the drab and unsettling poster for Justice League, DC’s Avengers, their first full line-up movie. I think it’s safe to say I’ve been more lenient to the DC movies than most of the reviewers I follow, but I still had absolutely no desire to see another DC outing.

The alternative was Thor: Ragnarok, the follow up to Thor: The Dark World, which is arguably near the bottom of Marvel’s film hierarchy, and God knows which number it holds in Marvels cinematic universe timeline. I should have Marvel fatigue, but I happily paid to visit this franchise yet again, knowing exactly what I was going to get, instead of giving DC the benefit of the doubt.

Setting aside the why and the how of my Marvel-tolerance, can Thor: Ragnarok be a better sequel than the first?

The review below contains mild spoilers

END_OF_DOCUMENT_TOKEN_TO_BE_REPLACED

Can the Uncanny Valley ever be overcome? The line between a computer simulation or robot, and a real person seems like a great chasm today, but once we get closer and closer, will the line blur, or will we become hyper-sensitive to the minute differences? Will we ever need to have a debate over a “grown” human’s rights? Are they the same as a robot? A fleshy version of Commander Data? Can an automaton have a soul if it passes an emotional Turing Test? Is it different if it bleeds? Do tests even really mean anything when we’re looking for a soul? We could sit here and have ourselves a podcast’s worth of questions, but let’s talk about the movie instead. Is it a good movie?

Blade Runner officer “K” (Ryan Gosling) goes out to a protein farm outside Los Angeles and “retires” one of the old replicant models. The replicant was hiding a secret so powerful it might “end the world” as officer K’s superior, Lieutenant Joshi (Robin Wright) explains it. It is up to K to unravel the mystery.