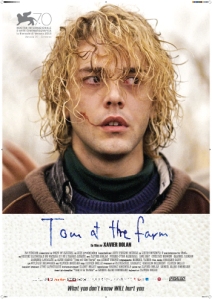 Set in wide empty farmlands somewhere in Canada, Tom à la Ferme surprised, touched and disturbed me. It comes across as an intense personal vision even though it’s apparently adapted from a play.

Tom comes to the farm in order to attend his boyfriend’s funeral. The mother, Agatha, doesn’t know they were together romantically. The brother, Francis, wants to keep it that way, and threatens Tom with violence should he say a word. At the same time, they both insist Tom stay. As the days pass, Francis becomes almost like an abusive boyfriend, one moment dancing a tango and bandaging Tom’s wounds, the next moment choking him. Agatha has more than a few issues herself, and together the three of them form a group with cult-like characteristics.

The story is slow with the tension increasing steadily. Perhaps it resonated more with me because I vaguely recall reading a book that played out similarly, and it was almost like seeing a half-remembered dream on screen. The actor who plays Francis, Pierre-Yves Cardinal, is creepy and intimidating, and yet undeniably compelling. Their first meeting – with Francis assaulting Tom in his bed with a warning about telling the truth – sets the stage for their violent and homoerotic relationship. Xavier Dolan, who plays Tom, emotes the terror mixed with desire convincingly.

The visuals can be a bit overindulgent, but mostly they fit the story, and with the beautiful music it keeps an even tone throughout. The extreme close-up conversations can be a bit taxing, and I won’t deny that as someone who doesn’t watch a lot of these types of independent films, it could have been edited tighter. Perhaps the film should have focused a bit more on Tom’s transformation from terrified to confused, and then to a willing participant in the lie. His own sudden creepiness, eerily similar to Francis’ own, might be hard to swallow for some audiences.

As Tom falls into the lie and his warped relationship with Francis, you get the sense that the story might be a version of events from one of our characters’ perspective. One event, however, makes it clear that things might be genuinely that disturbing. Later – at a bar not-so-subtly called Les Vrais Affaires – Tom finally gets some truth and is knocked back into reality. I’ll probably need a second viewing to decide on my exact interpretation. When the film finally ends, with more of that amazing soundtrack, I breathed a sigh of relief.

Tom at the Farm takes a few quick turns while at the same time overindulging in certain visuals, but overall it’s a compelling story that leaves a lot of room for different interpretations.