Today I watched the news as Britain declared their “independence day”. I then went to the cinema to watch a movie about the whole world coming together, putting aside their petty grievances, and defeating a real threat to earth. No one can predict what will happen as we live through these interesting times, but I’m pretty sure I can predict that Independence Day: Resurgence won’t last long in cinemas.

I’m coming at this film with nostalgia goggles at coke bottle thickness. I was ten when I first saw it, at a time when nothing like it had been seen before. I’m sure many of my generation remember the absolute awe at seeing the White House destroyed in the promos. Could a movie even do that? When our dad installed a new sound system a few years later, we knew exactly which movie we wanted to test it with, because the sound of those ships coming overhead was seared into our brains. Thankfully, I wasn’t all that hyped for the sequel. Considering the too-late-sequels and reboots we’ve gotten over the years, absolutely nothing could get my hopes up.

I’m not going to whine about how this ruined the old film’s legacy, because it wasn’t offensively bad by any stretch. But there is really no way around the fact that the sequel fails to live up to the original. There were certainly moments I liked. There was some great design here and there. I had a few laughs not based on referencing old material, but it wasn’t enough. The movie doesn’t work as an Independence Day sequel, and it doesn’t work as a sci-fi destruction-porn movie.

What follows below has ALL the spoilers, because I want to explain exactly what I mean.

END_OF_DOCUMENT_TOKEN_TO_BE_REPLACED

My expectations had been thoroughly put to rest after a week of seeing different versions of the headline “What Batman vs. Superman did wrong.” Hopes already dashed, I was still going to try my damndest to like the movie. Hell, I will still defend Man of Steel (and even Superman Returns in my drunker moments). Without even having seen a trailer, I was still ready to defend this film. Oh boy.

END_OF_DOCUMENT_TOKEN_TO_BE_REPLACED

nd – A World Beyond was first announced I, like many others, became excited. The project had a lot of good and interesting names attached, I was a fan of Brad Bird, and it seemed like it could show off everyone’s creativity. When it hit theatres, however, I was surprised at how “meh” everyone reacted. So much so that I decided to skip the cinema experience and let everything stew until it came out on Netflix (or in this case Viaplay). I think this was the right decision as it put distance between me and the initial reactions. I found the film surprising in that it took a few turns I did not expect (mostly because of the reviews I had read), and because of the creativity I could plainly see. Although, there is a lot of “meh”-ness as well.

END_OF_DOCUMENT_TOKEN_TO_BE_REPLACED

I had been anticipating The Man from U.N.C.L.E. for quite some time, but it arrived in the theatre here in Norway with little fanfare and only two screenings on Saturday night. I doubt there were more than twenty people in the small screen, which is a shame because I do think this movie has a bigger audience than it’s getting.

The film is based on a TV show from the 60s, but there are (according to wikipedia) several novels and a few comic books. One of the novels is titled The Vampire Affair, and apparently involves not only vampires, but werewolves, and an investigation in Transylvania. It sounds delightful, and could easily be a case for the new film versions of U.N.C.L.E.

END_OF_DOCUMENT_TOKEN_TO_BE_REPLACED

It’s been nearly a decade since Miller and Rodriguez took a trip down to Sin City together. As it turns out, the only reason to revisit the place is for a dose of nostalgia.

Sin City: A Dame to Kill For is a prequel and sequel, and can not be watched on its own, I would argue. It has probably been a few years since last I saw Sin City, so even I got my timeline mixed up. The main thing is, a lot of our characters are back, and the main baddie is still Senator Roake. The new Dame to kill for referenced in the title is played by Eva Green. She is an archetype femme fatal, who likes to screw with people both for power, and just for fun. Another new storyline is the one with Joseph Gordon-Levitt, who plays a poker player trying to go up against Roake.

END_OF_DOCUMENT_TOKEN_TO_BE_REPLACED 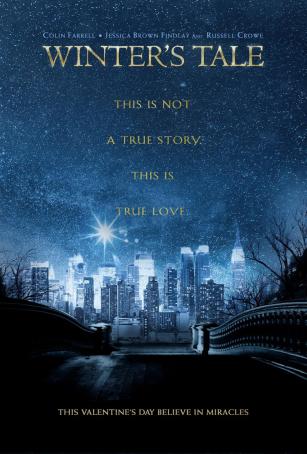 I knew absolutely nothing about the film Winter’s Tale when I sat down in the theatre. The title made me think of adventures in the snow, maybe some sweet story set in winter, but what I got was very different from expected. I think not knowing anything about it made it an experience I won’t forget, but I’m not sure that makes it a good movie.

The story, when I explained it simply, is a fairy-tale romance. A young orphaned thief falls in love with a dying girl. It turns out the evil forces of the universe (read demons and Satan) doesn’t want him to save her, because they’re all about destroying all the good in the world.

When I tried to explain the details, including which actors are playing the different roles, I got a reaction somewhere between skepticism and laughter. Colin Farrell plays the lover of Jessica Findley (Lady Sybil from Downton Abbey) and although the age-difference isn’t a stretch in Hollywood, it still felt odd compared to all the other supernatural romances with young, unknown, actors in them. Then we have Russell Crowe as an Irish gangster-boss/demon. And it’s all set in 1913, Brooklyn. Oh, and Will Smith is Satan. That’s when I lost most people.

END_OF_DOCUMENT_TOKEN_TO_BE_REPLACED

This week I was planning on reviewing some Oscar noms, but so much has been said about them that I didn’t feel like being an echo-chamber, so I went on Netflix and picked a random film from the romantic category. Nearly all my favourite love stories are period dramas. I think that’s because the costumes and Shakespearean dialogue lets you get away with a few more clichés. The Triumph of Love (2001) embraces the clichés, and delivers on all the good ol’ ones.

END_OF_DOCUMENT_TOKEN_TO_BE_REPLACED

FINALLY, autumn is here and I can watch movies in the dark!  With that awful life-giving ball of gas gone, I decided to spend some time catching up on my ridiculously long horror watch list. I picked two at random, both from last year. Let’s see which one (if any) gave me nightmares. Minor spoilers ahead because it’s impossible to write without them.

END_OF_DOCUMENT_TOKEN_TO_BE_REPLACED

Next week I’ll be back on the radio (I’m seeing Kick Ass 2), so I thought I’d make a little summary of the stuff I’ve watched over the summer.