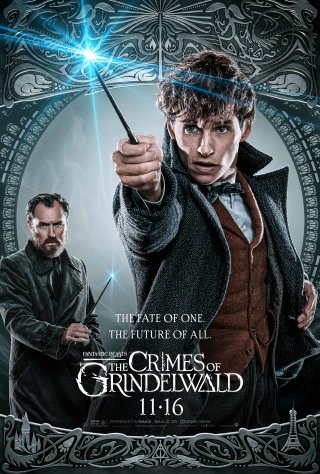 Let’s start at the beginning. What story does this film wish to tell, and what should it have been telling us instead? Credence is on the lose, and both Grindelwald, the magical authorities and Newt Scamander are on his tail, this time in Paris. The young Obscurus is trying to discover his true identity. Grindelwald wants to use his powers for nefarious purposes so Albus Dumbledore asks Newt to find him first. There are a few fantastic beasts of course, and Grindelwald does commit a few crimes, but in general the story is focused on the search. The search for Credence as he searches for his family history. The plot also tries to explore themes of dark and light wizards and how the ideology of Grindelwald can be alluring to even the most sympathetic of people, in this case the sweet Queenie.

The film, however, fails both structurally and thematically in telling a compelling story worthy of the franchise. I am honestly shocked JK Rowling wrote this film. Rowling has always been the master of the mystery. We always know what mystery we want solved, and we know why we need to solve it. Who is Sirius Black? If we solve this we will understand why he is trying to kill Harry. Who opened the Chamber of Secrets? If we solve this we will understand who is trying to kill students at Hogwarts.

Who is Credence Barebone? If we solve this we will know… who he is. Well, we might also know more about why Grindelwald needs him, but that is a maybe. (Honestly I’m still not sure what his identity has to do with Grindelwald’s plan). At the beginning we assume it’s because he is an Obscurus. Other mysteries in the film, like why Dumbledore won’t fight Grindelwald we either assume because of the books, or we don’t really care about since it’s not made into an important mystery. Even Newt’s task of finding Credence gets swallowed by the mystery of his identity without the film explicitly telling us the consequences of figuring it out. It’s like if Rey in Star Wars turned out to be a long lost Kenobi. So what? That’s not what the story was about.

What should this story be about? The crimes of Grindelwald, in my opinion. The story of Albus Dumbledore’s lost friend. A friend who almost convinced the iconic Dumbledore to go down a dark path with a racist ideology of magical supremacy. An ideology that has such staying power that the next generation follows Grindelwald’s defacto heir through two deadly civil wars. At least, that’s what I always assumed the story was about.

In the middle of this story we have Newt Scamander. An introverted, animal lover who doesn’t like, or understand, people. In the first film he found a few people he liked and grew a bit as a person. In this film his continued journey is stated early on: “I don’t do sides.” At the end he says that he has picked a side, which tells the audience that he has evolved more. This is not a deserved development in my opinion. The anti-social, neutral wizard was not taken on a journey to learn that people aren’t just tolerable or insufferable. They are good, evil and everything in between, and Newt has to pick which people to stand with, no matter how difficult that might be for a person who thinks normal social interactions are a mystery. The film wants us to accept a character development that was never explored.

The film that could have been is hidden inside The Crimes of Grindelwald. To see this hidden gem all we need is to duct-tape the plot to the protagonist’s journey. In the film the “even good people can make stupid, evil choices” thread is illustrated through Queenie. She is seduced by Grindelwald because her society doesn’t accept her relationship with Jacob. She picks the wrong side for the right reasons. They were cute in the first film, but they are the giant stick in this film’s wheels. They should have been left in New York. The story is stuffed with flashbacks and plot threads, and devotes considerable time to the love triangel (love quadrant?) between Newt, Leta and Theseus (and Tina). It’s baffling that a relationship drama that mirrors the bigger plot gets side-lined by Credence’s angst and Queenie’s stumble into the racist’s embrace.

Leta is supposed to be the Queenie character of this film. She has been told that she is evil since childhood. She is a dark witch from a dark family. She is obviously the perfect candidate for Grindelwald’s new movement. Theseus, a new up-and-coming Auror, is married to this person! The Ministry never once questions his loyalty, or hers. She never faces the old prejudices from her school days. In my opinion she should have been in real doubt about who to pick. Three choices: Grindelwald and power over those who once bullied her, Theseus and the light, or Newt and the freedom from having to make a choice at all. But Newt is a false choice of course. Not just because she can’t really choose him, but because chosing him isn’t neutral, and he will have to pick a side himself in the end.

This choice is mirrored again in Newt. Can he have Tina, the Auror, and remain neutral? Tina and Theseus, as Aurors, represent the non-neutral, light side. Instead of having the conflict with Tina be that she saw a typo of his engagement in a magazine and misunderstood (ugh), make it about Newt not making a choice. She can’t be with a man who refuses to stand for something, who would rather bury his head in the sands with his magical ostriches. The same is true for the relationship between Newt and Theseus. Can he reconcile with his brother, or will he refuse to engage in wizard problems? Newt wants to stay with his nice animals that are as easy to handel as it is to wave a bell on a stick. Then again, perhaps there is a third choice? Leta might hint at a way to have his animals roam free with Grindelwald’s new policies? Together they would free them all! Why does the film never use this as a way for Grindelwald to get to Newt? Baffling.

The story of Grindelwald’s ideology is the story of our own inaction to all such ideologies. Dumbledore should not be unable to fight him because of a blood oath. He should be reluctant because he doesn’t want to believe how far his friend has fallen. All through history people make excuses and ignore dangerous ideas. It’s just talk, it’s just posturing, it’s not like they’ll actually come and arrest people! He’s my friend. He would never really do anything evil. Newt’s inability to pick a side is our inability to draw a line.

If the film removed Queenie/Jacob, the excess animals, the magical fair, and maybe even Credence himself, it might have been something personal and huge at the same time. Newt and Tina are action vs inaction, Leta and Theseus are born family vs chosen family, dark vs light, destiny vs choice, and Dumbledore and Grindelwald are perhaps all of those things AND one epic love story in the middle of an all-out magical war.