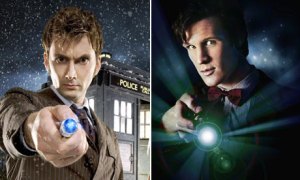 First things first: I have over the course of about a month become a massive Doctor Who fan. This has been on my to-do list for as long as I’ve been a geek, which is close to two decades now. About three seasons in, I was already massively “in obsession” with David Tennant, which was no surprise considering how much I enjoyed him in Casanova. I didn’t think anyone could top him, but Matt Smith managed to not only fascinate me, but make me love Eleven just as much as Ten.

So, as per my tradition whenever I find “new” actors to obsess over, I immediately started going through both of their CVs. As a way to find new films to watch, I love this technique. Although it means I have to watch a lot of movies that might not be really good, they are always films I never would have come across otherwise, and even if I don’t enjoy the films themselves that much, I can still enjoy the acting.

I picked one from each Doctor’s past, fairly randomly. The Decoy Bride (2011) from David Tennant’s filmography, and Christopher and his Kind (2011), starring Matt Smith. Both coincidentally from the same year – the first one with a 5.7 rating and the latter with a slightly higher 6.8 on imdb. No big hopes for either then, but with middle numbers like that you never know. Let’s see how they did! 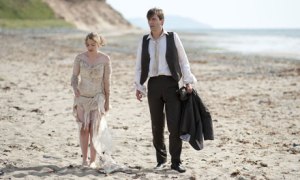 Perhaps best described as a Scottish rom-com, the film is set on the island of Hegg, which is also the setting for the author James Arber’s big novel. His fiancee, a paparazzi-hunted actress, decides Hegg is the perfect location for their secret wedding. It turns out the island of Hegg isn’t anything like in Arber’s book (he googled the whole thing), and nothing, of course, goes to plan.

As far as rom-coms go, The Decoy Bride does manage some amount of originality. As the title suggests, one of the islanders – the last single girl left, Katie, played by Kelly Macdonald – has to step in to keep the paparazzi guessing. The awkward meeting between Arber and Katie, which soon graduates into bickering, is occasionally charming thanks to the caliber of both actors.

Unfortunately, the rest of Hegg falls as flat as the island itself. The characters are all very stock-types, including the shop-owner who sees no reason why anyone would want to live anywhere else. Britain has more than its fair share of weird little places, and despite Katie’s amusing attempts to write a guide-book, there just isn’t much to set Hegg apart from all the others. Lara Tyler, Arber’s fiancee, portrayed by Alice Eve, has very little to do, and I didn’t even see enough to guess whether that was good or bad.

A lot of authors say endings are hard, and certainly the film-makers must have thought so too. The Decoy Bride ends just as expected, but with the resolution part cut out. We simply skip a few months ahead to make sure everyone gets to where they’re going, which is of course nowhere except the not-so-charming-as-they-think island of Hegg.

If you’re a massive Tennant fan, you’ll no doubt enjoy him wandering the island looking like a 70s rock star, and there’s an incredibly sweet scene with a deaf couple dancing to imagined music, but as a whole the movie feels like it’s missing a plot twist here and there.

Christopher and His Kind 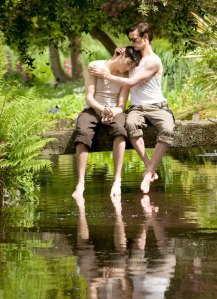 Another author, Christopher Isherwood (Matt Smith), but a very different setting. In 1931 Christopher travels to Berlin at the invitation of his friend H. Auden. The film begins with Christopher as an old man, however, writing his memoirs, and he notes why he crossed the canal: boys. The city offers an extensive gay scene, but the world of politics and the march of history soon encroach on Christopher and his friends’ world of coffee houses, gay bars and cabarets.

I’m just going to say it: I was really surprised by this film. Perhaps I’ve been overexposed to World War II films and history in general, and my brain simply can’t muster up the energy to take all the horror in again. Christopher and His Kind, however, felt like something new. It’s a very personal story, and the rise of Hitler and the Nazi Party is only ever on the outskirts of the film, always talked about as something looming. In contrast to Christopher’s views are those of his boyfriend’s brother, who supports of Hitler as the man who will help secure his future. It’s a fascinating glimpse into ordinary people’s lives as history unfolds around them, forcing them to make small choices that effect a few, cherished individuals.

You can’t get around Matt Smith’s performance in this, and the whole thing hinges on whether you enjoy his acting. Occasionally, his über British-ness during his narration seems almost like a parody, but whenever he’s on screen you can see that he just simply is that British. He might seem a bit stiff at first, but his child-like wonder at the openness found in the gay underground is captivating. There is also an amazing moment during a book-burning where he sums up all the emotions in one word and a look.

The film is based on the autobiography by the real Christopher Isherwood. Usually when films are based on books, fans want you to stick to the page, but with biographies I always feel that’s a mistake. Life just isn’t very interesting on film, and I think had Christopher and His Kind ended as the war began, it might had left more of an impact. The scenes during the 50s feel like a debriefing meeting. Some might complain about accuracy, but that’s what you have the book for. Despite this, it was much better than the 6.8 suggested. If you’re looking for an interesting view on the road to WWII and the gay community at the time, it’s absolutely worth an evening.