For many, the night Princess Diana was killed is one of those “where were you?” moments. Even if you didn’t follow the worlds of celebrities or royalty, or the causes Diana highlighted, or even if you were just a little kid from Norway, you knew who she was and what she stood for, and that her life – to quote the film – was dramatic.

The film that bears her name has a lot it can explore. Diana and Charles supplied the gossip rags for years with their affairs and divorce. Her death is forever linked to the paparazzi culture, and her role as the People’s Princess is a fascinating phenomenon. With so many areas to explore, where will the film even begin?

END_OF_DOCUMENT_TOKEN_TO_BE_REPLACED 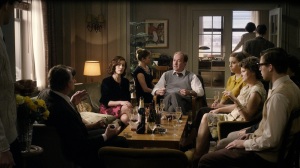 In a remarkably personal and grounded film, the story of Hannah Arendt’s rapport on the trial of Adolf Eichmann gives us a slanted view into the nature of evil.

The story follows Hannah Arendt, coiner of the phrase “the banality of evil”. We follow her coverage of the trial in Jerusalem in 1962, and the subsequent reactions to her publications on the subject. It covers roughly four years, apart from a few flashbacks to her time in school and her affair with the philosopher Martin Heidegger.