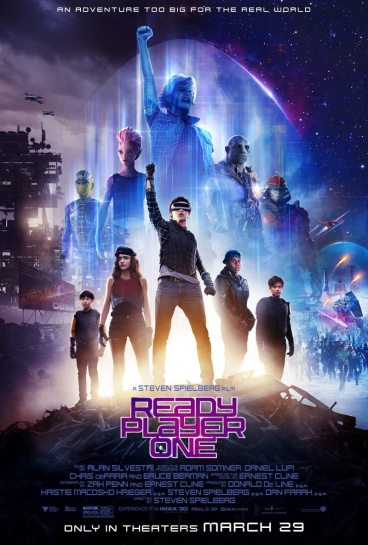 Reading the novel by Ernest Cline felt a bit like watching an episode of The Big Bang Theory – not necessarily in a bad way, but more in the way that I wasn’t exactly sure who the book is written for. The book is, at first glance, for young and old geeks who like geeky things and aren’t opposed to a bit of pulp in their fiction. That’s definitely me! But at the end of the book, I didn’t really feel anything, and it had not felt like an adventure. Maybe I’m just not of a “good enough” nerd, you might say. If you do feel inclined to say that, maybe the book’s for you.

The film, on the other hand, does away with a lot of the American Psycho-esque listing of esoteric knowledge and keeps the story grounded much more in reality, both in the reality of the characters and the reality of, well, actual reality.

Ready Player One (2018) is the story of Wade Watts and his life in and outside of the Oasis, a virtual reality game that has grown to the point where the entire world’s economy, education, social interaction, and free time take place inside it. Its creator, the deceased Halliday, hid three challenges inside the game. For each challenge the winner gets a key, and the three keys will lead the player to the Easter Egg, which will grant them ownership and full control over the Oasis. Over the years since Halliday’s death, only lone die-hard fans like Watts (or Perzival in the game) continue the search, along with the soldiers for IOI, a giant corporation that wants control.

Full disclosure here: I do not actually remember a lot about book!Wade’s motivations. He left no imprint, take that for what it is. Comparing the structure of the two sets of challenges, however, will easily illustrate what Spielberg did to make Ready Player One a story for the best target demographic: again me, of course.

Instead of Perzival reading an Almanac and completing lesser-known games because he has been practicing them all, the challenges are only at face value a test of a gamer’s skill. To really solve it, the player must be familiar not only with Halliday’s many favorite games and films, but understand him as a person.

In fact, no game must be played to the finish in the film. To win you must understand what Halliday ultimately found truly important. Not the Oasis, not the amazing program he created, but the reality we’re suppose to be living in. Where people can meet, IRL!

Wait a minute, this smacks of anti-technology propaganda. Rather surprisingly, the film balanced the messaging very well. Real connections are made in the game, and at the end of the film no one is saying the Oasis needs to be shut down. Just like, take a break every once in a while, you know?

Altering the challenges, creating this “moral”, and making Wade Watts more young adult than teenager, all helps to create a more classic journey. It actually makes a pulpy, fun adventure novel easier to swallow. Wade Watts isn’t a know-it-all who wins because he is the best at Joust, but because he empathizes with Halliday, and grows as a person. He confronts his own reasons for even wanting the Egg, and joins the Resistance, instead of being rescued off to the novel’s version of Skywalker Ranch.

This also creates more fun action. The chase sequence and its impact on his movements inside the Oasis was an excellent way of joining the two realities, a feat which has always been difficult to achieve in these types of films. Take as a counter-point the film version of Assassin’s Creed. There is no sense of care for the character inside the Animus. I feel no sense of danger, and he still looked like Michael Fassbender. In the Oasis, I felt excitement and sadness when CGI characters died. That’s pretty rare in my book.

All that said, the film didn’t leave a massive imprint either. It relies far too much on narration, a trope that needs to be banned from all fiction to film conversions. Despite the streamlining of the challenges to make them more accessible to mainstream audiences, the film still suffers from that book-to-film info dump. The plot feels a bit rushed because of that. The supporting characters Daito and Shoto, the impact of IOI’s attack on Wade, the love story, all are given enough screen time to just barely say they are, in fact, present in the film.

Ready Player One is still, like the book, a celebration of geek culture. The references, the characters, are all there to spot if you have the time. Because they are limited to the background most of the time, as easter eggs themselves, it doesn’t feel as in your face as in the book. There is a sense of celebrating the people – the creators, the players, and the fun we had playing and watching, rather than just celebrating the biggest nerd of them all.