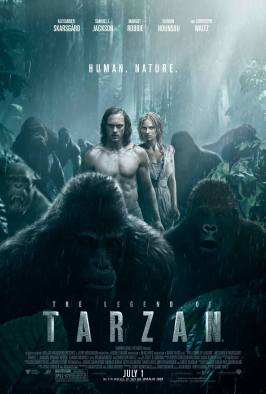 I was never a great fan of Disney’s Tarzan. The songs and animation are outstanding, but the film can be quite annoying whenever it forgets its purpose, which is often. Tarzan is an iconic character, and like many such characters he has been reshaped from the book version into a more fixed idea in pop culture. The classic shout, for example, is from an earlier live action film. It’s surprising it took this long for us to get a modern remake, but perhaps not if we look at the success (or lack thereof) of similar properties.

The local reaction to the new films has been a lot of “meh”, and the cinema was almost empty when I finally got there this weekend. Someone called it an empty action flick, which I think is an unfair assessment. But, as I always try to expose my biases, I tend to be far more forgiving on these types of adventure films than most (see: John Carter, Prince of Persia, etc)

The Legend of Tarzan (2016) stars Alexander Skarsgård as Tarzan, and is set about eight years after Tarzan and Jane (Margot Robbie) have left Africa to live as Lord and Lady Greystoke in London. They are called back to Africa by the invitation of King Leopold of Belgium to see his great progress in the Congo. Those with a overview knowledge of history will know this is a load of crap. The King’s agent in the Belgian Congo, Leo Rom (Christoph Waltz), has other plans for Tarzan.

The below review will contain minor spoilers.

First off, yes, this is set in the Belgian Congo. Geographically, it doesn’t quite seem to fit with how Tarzan’s family was shipwrecked off the coast further south. The gorilla group’s main area seems to be far more inland than the shipwreck shots suggest. But we will forgive the film this logical plot hole since it does put the legend in a very interesting context. An agent from the US, George Washington Williams (Samuel Jackson) has come to find evidence of the Belgians’ treatment of the inhabitants. The film is obviously not in a position to show the true extent of the atrocities committed in the Congo, but it does show kidnapping and enslavement on a big scale. The film straddles, perhaps uncomfortably, lines between adventure, love and historical drama. When in doubt, it falls back on action. The different elements do not always mesh, and there is never enough time to devote to it all, but I found all the aspects interesting.

The Disney version’s greatest flaw was the godawful side-characters. This film has a lot of side-character as well, and as stated we don’t get enough time with any of them, but I liked all of them. The main warrior from the local tribe Jane grew up with, for example, was brave yet playful, a fact conveyed with very few, but effective scenes. The secondary antagonist, Chief Mbonga (Djimon Hounsou), is also barely present, and yet his presence is felt, and the performance is powerful despite its brevity.

The weight of the film is carried by Skarsgård and Waltz, however, and they both give great performances. Leo Rom is motivated by the promise of legacy and profit, but he has an underlying creepy vibe that has got to be written for Waltz alone. At his inevitable end, I felt great satisfaction – a sure sign of an effective villain in my book.

Tarzan himself is nuanced, but is also the source of the film’s greatest misstep. Skarsgård has the ability to go from wild rage to tender love in an instant. His eyes, like the eyes of the mostly well-done CGI animals, conveys most of his performance. He has, however, also been written as slightly sassy, which I adored. He has a few great moments with Jackson’s character. They don’t all mesh well with the rest of the film, but I like the idea of Tarzan mastering sarcasm as a sure sign he has been “civilized”. The film takes great pains to not show Tarzan in any gorilla-like stance, probably because that would look ridiculous, and I’m frankly thankful for that decision.

The film’s promotional poster has the tagline “Human. Nature.” The story of Tarzan is that of a wild child, a trope that fascinates us to no end. The beginning of the film seemed to suggest the story would explore this somewhat, but with the Belgian Congo, side-characters, rescue and two antagonists, we don’t have time to explore anything. This is a real shame, since Skarsgård would have acted the shit out of this story. We see no real difficulty for Tarzan to be Lord Greystoke. He has to handle a few awkward comments and questions, but he seems completely at ease with his transition from wild child to Lord of the Manor. You could argue that’s what the Disney version explored, but Tarzan and Jane chose the jungle in that version. Here, the pair has chosen London, an estate, and a seat in the House of Lords. How did that transition go? There is very little exploration of Tarzan/John’s identity – except hints about his relationship to his “foster mother”. These glimpses are great, but it could have been so much more.

The Legend of Tarzan (2016) has interesting characters, a fascinating setting, good CGI, pretty fun action, and a good villain. It is not a Great Movie. I’m not going to oversell it. It’s bloated by story and characters, and feels rushed. One second we’re three days inland in the middle of the jungle, next Tarzan and Co. are standing overlooking the coastal town. Sometimes the writing feels forced. The cinematography can be overbearing. But it still occationally gives me that epic feel I love about these types of movies. Movies about big epic adventures and what those adventures do to our heroes.

I’m not giving this a big thumbs up, but I’ll be catching it again when it comes to a streaming service near me.

One thought on “The Legend of Tarzan”