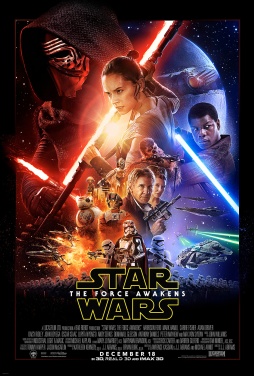 The bar was low. I was one of those who had been burned before. One of the disappointed ones of 1999. I had my own reasons for hating the prequels, though I must agree with most of what RedLetterMedia has put out, and Belated Media’s “alternative version” made me quite emotional. But, when the crawl started I was twelve years old again and JJ Abrams would have to make his worst movie ever for my hopes to be crushed. An average adventure film was all that was needed.

Warning: if you are even worse than me and haven’t seen it yet, get your arse to the cinema. SPOILER WARNING.

The story resembles A New Hope in many ways. A droid is sent off with secret documents, runs into a character stuck on a desert world (Rey, played by Daisy Ridley). Along with the ex-stormtrooper Finn, they need help getting to the resistance. This comes in the form of Han Solo and a visit to a pub. Meanwhile the resistance battles a new world-destroying weapon, the starkiller base. (Is it odd that Death Star and Starkiller sound sort of like opposites? One’s a star that kills and the other kills stars?)

I’ve read a lot about how it’s essentially a remake or reboot, and a lot of that is true. But I’m going to try and focus on what I loved about Star Wars – Wow, it’s been a long time since I felt confident about that sentence.

First of all, it isn’t just the hero’s journey. It feels much more like a group effort. The film balances things remarkably well, and apart from the pilot Poe, all the characters get good screen time. The ending scene was a bit long and unnecessary, but overall it is a good film. The bar has been lifted. I’ve seen it twice and it did not drag on the second viewing. In fact I enjoyed a few scenes more the second time.

“Star Wars is fun again!” as the mantra goes, and it is. For me, the big thing is that it feels operatic again. John Williams’ score is fantastic (my favourite was Rey’s theme, hands down), and scenes are allowed to be weighty and dramatic without feeling forced or just cringy. Most importantly they feel real and on location. In one scene we see a bunch of x-wings take down TIE-fighters while our heros fight on the ground against the stormtroopers. There is this wonderful shot that follows the battle in the sky and ends in a group of stormtroopers being blasted off a wall. These types of well-coordinated shots are what made the film for me. I was forcibly reminded of the over-packed fights of the prequels and how they failed utterly to engage with me.

Even if you weren’t blown away by The Force Awakens, you can’t deny it’s a great time to be a Star Wars fan. The potential for unique storytelling has never been greater. All the competent film-making in the world would not make up for poor acting or uninteresting characters, however. Luckily, gone are the days of awkward dialogue: welcome to the era of emoting through facial expressions and performances from people who look like they enjoy acting.

Many have said that Rey is a bit of a Mary Sue. I can see the arguments, but I did not get that impression. She isn’t just a “fan” of the old days, she has lived a hard life and kept her spirits up. She has a nice balance of enthusiasm and caution. She loves the legends of old, but she does not have a hunger to become a jedi herself. She has to face her fears in order to accept her destiny.

That reluctance to enter into the story is also found in Finn, the turncloak stormtrooper. Despite his modern way of speaking, he is endearing. The two have great chemistry. One thing I didn’t like is that he doesn’t really have a “past” to justify the way he speaks. He decided during his first battle that he wasn’t going to fight for the First Order, but apparently his work in sanitation means he can talk as though he’s seen all the horrors of war. Any work for the First Order will probably mess you up a bit, but I think the audience could have handled a good guy who has done some bad stuff (who shot first again?). That said, Finn does nicely contrast to the heir to Vader, Kylo Ren.

I could write essays about Kylo Ren. I love how his adoration of Darth Vader sort of mirrors Rey’s adoration of Luke and Han. Both have ideas about the old order, but neither of them have the full story – or at least we must assume Kylo doesn’t fully understand Vader’s last decision. I can’t help but feel, however, that Kylo understands more about the dark and light sides of the force than Anakin did. This, to me, makes him less redeemable. It all depends on what Luke taught him. The moment when Kylo takes off his helmet was interesting. On the one hand he looked way too young to be that intimidating, while on the other hand came the understanding that even those who look innocent (and let’s face it, pretty gorgeous) can still be evil. I think Rey’s expression said it all, as it often did throughout the movie. Although Vader was more silently menacing, Kylo Ren induces absolute terror in his minions.

None of the new characters were dull or complete missteps in my opinion, and hopefully we’ll see new dynamics in the sequels. As for the old guard, they really nailed the idea of “handing over the baton to the next generation”. Harrison Ford is a joy to watch. It’s like he had Han Solo in his muscle memory all along. As for Luke – there is a definite danger of him becoming a Yoda/Obi-wan copy in Star Wars VIII, but I think this films proves they can put a new spin on an old formula.

What I’m left with is that Force Awakens is a great jumping off point. I had a few issues with the script, but on the second viewing I didn’t find them all that grating. Maybe it’s just a matter of getting into the spirit of this Star Wars, while shaking off the prequels and remembering that the originals aren’t perfect nostalgic artefacts. Perhaps the greatest compliment I can give the film is that I probably would have enjoyed it just as much if this had been our first film.