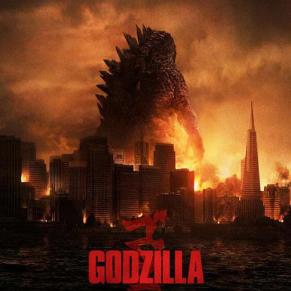 The trailer for Godzilla (2014) gave me actual shivers. I’ve never been a Godzilla fan, but I think I understood his potential, even while being misled by the fun but generic monster movie of 1998. When I saw the first image, I think I finally understood why hardcore fans referred to the previous Hollywood version as Godzilla In Name Only. The iconic profile, obscured in debris fog, made my anticipation rise to fanboy-levels, even though I have never seen an original Godzilla film.

You do not want to go into this movie spoiled. This film has one of the few trailers, and marketing campaigns, that hasn’t ruined anything. Suffice it to say, it’s a film about Godzilla, and there might be something else lurking around. The humans in the movie are just as important, however, if not more. You have Bryan Cranston as a nuclear engineer, with Aaron Taylor-Johnson playing his son, who is married to Elizabeth Olsen. Fun fact: they’ll be playing brother and sister, Quicksilver and Scarlet Witch, in the next Avenger movie, hopefully with a different kind of chemistry.

If I had to use one word to describe this movie, it would be “tease”, but I admit that’s perhaps a little unfair. Maybe if I accept what the film is trying to do more I could use something else. My emotions were very mixed when exiting the cinema. The reason, plain and simple, is that Godzilla takes too long to show up, and even longer to show himself.

The reason for this is the way it’s shot – we are following the humans and their struggles to get out alive while everything falls down around them. The film gives us the birds-eye view from the helicopters above, and the on-the-ground action by the people running for their lives. Most of the time, neither of these angles lets us see all the action. This is not Pacific Rim, where the camera follows Gypsy Danger’s hand as it drags a cargo ship down the streets of Tokyo.

Godzilla is dark realism, not campy action, but there’s not much shaky cam either, thankfully. The camera is steady, it’s just that if there are no humans to see it, we usually don’t get to either. What this does lend itself to is beautiful, spooky shots through thick fog and debris. Even when we have already seen Godzilla in all his glory, a shot of him moving through the San Francisco fog is still awe inspiring. The cinematography is what sells this movie, partnered perfectly with the sound design. This alone means you should experience this movie first in the theatre to get the full effect.

The “tease” is still a problem for me, however. I really wanted to see more of the big picture. The characters we follow around are all decently written and acted, but only Cranston’s character really stands out, and he’s hardly in the film either. Elizabeth Olsen is good, but I honestly don’t remember her character’s name. She’s the wife who plays a nurse so she has an excuse to stay in the city while it’s attacked. This is disaster-movies 101. Maybe it’s wrong to complain about lack of originality in number 29 in the Godzilla franchise, but it’s not gripping me, and when your background is f-ing Godzilla, your leads better be worth the screen time.

I liked Godzilla, but I would have liked it even more with just a bit more fighting. I do realise that the film makers wanted to do something more than a monster-smash movie. They wanted to show the ants running around while they get stomped on, and I do think it’s a fascinating perspective when we are the ants. So, I am going to guess that on a re-watch I will like this much more. Therefore, it’s both a dice roll 4 and 5, depending on my mood.