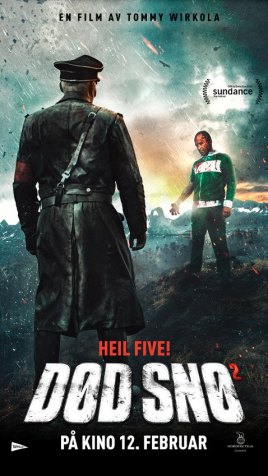 If you haven’t heard about the Norwegian zombie-movie Dead Snow (2009) then you are in for a treat – if you like zombie comedies, that is. The film resides both inside and outside the genre, poking fun and fulfilling the tropes at the same time. It is gruesome, but the actual massacre isn’t really disgusting. The most grotesque moment, for instance, comes not during one of the many intestine-ripping scenes, but when two of the group have sex in the outhouse. The film features the standard “friends on a camping trip in the mountains”, but ups the ante by including zombie Nazis on the hunt for their Nazi-gold. One by one, the group gets massacred, ending with our last protagonist thinking he finally got away, only to have the Nazi leader, Oberst Herzog (how many zombie movies have zombies with names?) about to finish him off.

And that is where Dead Snow 2 (Dø Snø 2) starts, after a quick recap, so there are some spoilers ahead if you haven’t seen the first one. Our protagonist had his arm cut off during the first film, and during his escape he manages to rip the arm off Oberst Herzog. At the hospital the doctors accidentally attach the zombie’s arm, which turns out has a bit of a mind of its own. Meanwhile, Oberst Herzog and his army of zombies start recruiting in order to finally accomplish the mission Hitler set them: wiping out the quiet town of Talvik.

Dead Snow 2, I would argue, goes beyond spoofing and becomes something unique. It is unlike other comedy zombie-movies. The main difference is probably the fact that the zombies are both terrifying in their cleverness, and hilarious in their stupidity. They aren’t slow like Sean of the Dead, and they aren’t just window-dressing like in Zombieland. Oberst Herzog is a badass, with a grim history and cunning intellect. His men are the more traditional brain-dead zombies. One of them in particular, played hilariously by well-known Norwegian actor Kristoffer Joner (credited as side-kick zombie on imdb), is a sort of puppy-zombie. This joke, with a handful of others, probably works best in Norway, but otherwise I think the films is funny regardless of country of viewing.

The film is a lot funnier than what I expected. I haven’t laughed this hard at the cinema in ages, while at the same time thinking what a horrible person I am for laughing. The director Tommy Wirkola seems to have a bit of a fascination with intestines, but he still manages to draw laughs even after a dozen intestine-pulling scenes. If this doesn’t sound like your type of humour, then avoid these movies. They don’t pull their punches in the slightest, so be prepared for tanks squashing policemen, babies exploding, and lots and lots of brains.

While laughing at the absurdity of it all, there are also moments of badass spectacle that add just the right touch of personality in Oberst Herzog. We get these delightful little glimpses into his history, and these details are treated with very little humour. It creates a villain that we get true satisfaction seeing our protagonist go up against. He appears as a real threat, and the zombie horde we are used to suddenly has a leader.

I kept thinking I would grow bored from seeing more of Dead Snow’s butchery, but thanks to the back-story of Herzog, and how the film creates a goal for the villains separate from just “eat brains”, the film actually has an interesting plot. It doesn’t outweigh what we came for, but it adds spice to a good meal.

It is better than the first one? Yes, I think so. There is no build-up, no long trek up the mountain with people we only listen to in order to bet which one gets killed first. In Dead Snow 2 we are rooting for our protagonist, and we want to know what Oberst Herzog has planned. The film never stops, and although some jokes fell a bit flat, it still made me laugh a lot harder than the first. Why do I laugh? I think that question might be too disturbing to analyze in this case.

The Dead Snow movies are definitely not for everyone, and not even all zombie fans, but if you find yourself needing to laugh at something so grotesque it might make you question your moral centre, I highly recommend these zombies. I’m probably not the right person to judge, but I do not feel the films ever cross any lines in terms of the history of the actual events. But at the same time, I do feel a bit terrible for laughing so much. Perhaps it’s like the comedian Jimmy Carr said, that it’s when you’re right on the edge you laugh the hardest.