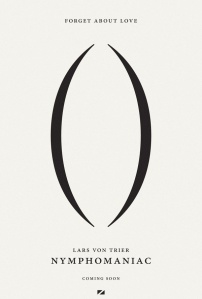 It feels like I’ve waited years for this film to be over and done with, but now I’ve finally seen it (despite not really wanting to) I admit it surprised me and perhaps changed my mind about seeing more of von Trier’s films. Before this I had only seen Dogville, and while I appreciate (or think I do) what the film was attempting, it never reached me personally. Lars von Trier’s films continued to fall into my “maybe some day” pile mostly do to this.

The story’s of Nymphomaniac is in the title, but you wouldn’t guess from the promotional material. The posters were everywhere when they came out. In stylish minimalism, all the film’s recognisable actors are shown half-naked at the moment of ecstasy. To me, they all hinted at a film chock full of several sexual “deviants” who would all get their moment in the spotlight. The style of these posters are far from what you get in the theatre. I saw an edited version, but I can not imagine a version that had the time to give all the characters their “poster moment” to put it that way.

The film follows the story, as told by herself, of Joe, a nymphomaniac. She tells her story while being nursed back from an assault by Stellan Skarsgård’s character, Seligman. Her story is an attempt to prove to him that she is a sinful, unredeemable person, but Seligman argues stubbornly in her defence. During this very long story Seligman offers up several odd but mostly charming anecdotes that loosely relate to the story, and which Joe uses as headings for the chapters that make up her life.

Her obsession with sex starts in childhood, and only grows from there. She recounts her many different partners, and how her life was shaped by them. Of special interest is Jerome, played by Shia Leboeuf, who is the only man she appears to fall in love with despite her rejection of the idea.

I suppose a disclaimer should come first. Lars von Trier did not have any say in the editing of the version I saw, though he gave his permission. I hope the story itself is intact according to his vision, and that obviously only very explicit scenes were cut. But there’s no way to know exactly what was lost without seeing the director’s cut. It should also be noted I technically saw two films, Volume 1 and 2, but in my mind it is hard to remember where the cut-off point was, as it all flows together without any attempt to make one stand alone. Now on with the review.

I think what surprised me most about the film was how traditional the story itself felt. The chapter headings, along with the very traditional – almost folksy – act of one telling a story to a captivated audience, put distance between us and the tale. Had the film not had this clear sectioning, used to take us out of the story, I would guess it might not be as easy to swallow. Joe has a very no-nonsense sort of voice, kind but distant, and the result is that whenever her voice cuts into a scene to explain her emotional situation, I instead felt a wall come up between me and the characters. Especially when it comes to others than Joe, like her father, played by Christian Slater. He appears as a very interesting character, but we never really get invested in him beyond what Joe tells us she feels.

Despite this occasional distance, the story is of course very personal for Joe. I did sympathise with her, but as Vol. 2 began she makes some morally dubious choices. Unlike Shame’s main character, however, Joe has a pride in her condition, which she blames society for not accepting. This makes her a complex character, both condemning herself for what she does, and us for judging her, so it’s likely people will have very different takes on her.

The other main thing I found surprising was how strangely sweet and quirky, at least Vol. 1, is. Several times I laughed out loud at very explicit scenes. I hope the funny moments were all intentional, and I think the film is self conscious enough to pull it off. There is an awareness that sometimes the situations, no matter how sexual they’re trying to be, are just plain hilarious and awkward. This might not be the case with the director’s cut, but I definitely enjoyed those moments.

In the next volume, most of the humour is gone, replaced by a sad tale of loss and irredeemable acts. Seligman’s defence of Joe is wearing thin. The sadness also comes across as very traditional with the story-telling aspect. Perhaps I’m just a cynic, but I was never invested enough to be either terribly disgusted or sympathetic. That’s not to say I never felt those things, I did, but they were surprisingly muted. Perhaps again, the uncensored version does away with this distance.

I guess I’m not prudish enough to be shocked by the film, and I honestly can’t imagine a person who would be (I guess von Trier’s own version will come closer). Instead, I judge the film(s) on their merits as a sad story about a girl who grew up with a difficult affliction. Taken as that, it’s an all right film. Nothing too special, and way too long, but definitely worth your time if you think it sounds interesting. Some of Seligman’s asides are bit long, but you still want to know how Joe’s story ends. I give it a solid dice roll 4.