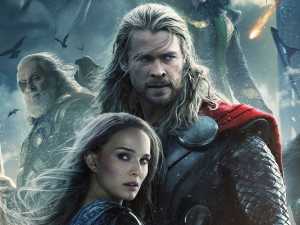 I know I’m late to the party, but it has taken me this long to get my head around this movie. So let’s see what I’ve concluded after two weeks.

Thor: The Dark World takes place almost exactly where The Avengers left off. Loki is hauled back in chains to face Odin and sentenced to life in prison. Before that, however, we get a big, action-packed flashback to Odin’s father, who battled the Dark Elves – beings who ruled “before” the universe as we know it existed. They want nothing more to go back to that status quo, so their leader Malekith tries to use a mysterious, dark-matter like, substance called ether. He fails and goes into hiding. Until Jane Foster manages to stumble upon the substance and wake it up. Now the substance is inside her, and Malekith will stop at nothing to get it out.

This is the second Thor film, but it is technically the third in a trilogy, considering Loki’s importance in The Avengers. At the same time, Jane Foster’s story was put on hold in that film, so it does feel more like a sequel to Thor. It leaves the film at an odd, but interesting position. I find the universe that the Marvel films are developing fascinating. The threat of Malekith is at an universe-detroying level, which puts it on par with The Avengers, and way above the threat level of the third Iron Man. On the other hand, we remember The Avengers teasing us about the real Big Bad, Thanos. He won’t show up until the Avenger sequel, however, so we’ll have to wait for that pay off.

What all this does, at least in my mind, is place Malekith on a strange threat scale. He is a good villain, but he is very straight-forward, and the film is so packed he doesn’t get to do all that much. His scenes are cool, but let’s face it: compared to Loki, he’s completely one-dimensional. Despite his goals to destroy the universe, the film also somehow manages not to convey that massive threat. Let me explain.

For the first half, he acts as a local threat to Jane, and through her Asgard. Even though we are reminded of his goals, it’s not until the last big showdown that the true scale of his threat is shown – and even then it still feels very local. Only Greenwich and Asgard see actual destruction. Two jets fly through one of the portals, but they come back unscratched and not a single person in one of the nine realms is shown to know that anything really big is amis. Not to mention the rest of Earth. Malekith is about to destroy the universe, and his space ship just wrecked Greenwich, yet two tube stops away life is moving along at regular commuter pace.

The events of the film also don’t seem to affect the rest of the movieverse. Maybe we will see those effects in later films. In Iron Man 3, I forgave SHIELD for not showing up. But holes in time and space are popping up, and they never even send a team? Darcy mentions they might be right around the corner, yet even when the British government has sent out jets, there’s not a logo in sight. It may seem like a small detail, but it really limits the scope of an otherwise massive and epic movie in an easily fixable way.

There are other plot holes I have been struggling with, but most of these can be ignored. It is a Marvel film, after all, so it’s time to shut off my brain for a while and enjoy! As mentioned, there is plenty of scale and epicness to go around. The visuals are amazing, the acting is great from almost everyone, and we get some interesting character development and world-building.

Most of that character development goes to Loki, fan favourite for very good reasons. It’s not just that he is the quintessential bad-boy, but the unending unpredictability. You never really know how much he’s feeling. Even if you’ve been fooled by him a dozen times, you still feel that slight hope that maybe this time it’s not a trick. God of Mischief that he is, he still manages to tease us with the possibility of his redemption. Most of this achievement is down to Tom Hiddleston’s multilayered performance. The man does Shakespeare like it’s a walk in the park, so it’s no wonder he can give Loki a proper classic villain feel. On top of that, he creates a compelling – and occasionally hilarious – relationship with his brother.

Chris Hemsworth should not be forgotten in all the fangirling. While he doesn’t have the same journey to go on as he did in Thor, he still gets to do a lot of cool stuff. He’s a proper bad ass God of Thunder, no question. His relationship with Jane Foster was always the weakest link in Thor in my opinion, and luckily his love for her this time is showed a bit more. I don’t think it’s enough, however. You get a few quiet moments that finally really flesh out the relationship, but due mostly to Natalie Portman’s subdued performance, it doesn’t really hold our attention. Especially since every other relationship is more interesting.

Which brings me to the father-son relationship. Question: Did the writers do crossword puzzles every time Odin was on screen during the last film? He seems to have done a complete moral 180 since then. Let’s recap: He lets his adopted Frost Giant son commit suicide rather than lie to him for the two seconds it would have taken to save him. All because he wouldn’t let Loki think it was OK to kill Jotuns. He banishes his other son to Earth to teach him a lesson, presumably because he believes the people there are moral enough to be able to teach him that lesson. If Odin thought humans weren’t worth anything at all, then sending Thor there would only result in Thor having a bad camping trip among the savages. In The Avengers he sends his only begotten son to Earth to stop Loki destroying stuff. He places Loki in prison for life!

Cue next film, and Odin has taken lessons from Gambon’s Dumbledore in how to ignore previous character traits. “They are nothing,” he says about humans. He would throw a sick Jane Foster back to Earth without so much as a temperature check. Instead of disapproving of genocide, he now endorses it fully. All Dark Elves must die, period. I know they’re evil, but so were Jotuns last time I watched the first film.

It’s a minor issue, again, since Odin isn’t the focus, and the main characters are all amusing to watch and have that magic Marvel awesomeness. Anthony Hopkins does well with what he’s given, and the scenes with Frigga are really touching. Also, all my praise to Rene Russo for kicking ass! I loved her.

Thor: The Dark World manages to be both a great addition to the Marvel universe, and a good sequel. It answers questions about the first film and adds new ones. The action is well-paced and the set-pieces overall are great to watch. The problems can all be ignored, if you want. But for me, there are just too many plot holes. From tiny ones that fly by in a second, to bigger ones that the film tries to push away with techno-babble. I’m a big Trekkie, so I know what good technobabble sounds like, and cutting a person off mid-sentence because it wastes time just isn’t good enough.

Then there is the post-credit scene. For comic-book fans I’m sure it was great to see another character, but no matter who he is, or what you know about him, the scene just doesn’t make sense. The actions of our heros aren’t explained, and our logic requires more. I won’t spoil it, but it really made me doubt how much I had enjoyed the rest of the film. When you end on such a baffling note, it colours the rest.

Despite this, Thor: The Dark World is very good. For a sequel, it’s great. You get the same action, only bigger, with that same brand of humour that made me fall in love with the first one. Most of all, you get more Loki and Thor together with that same level of drama we expect. If Tom Hiddleston isn’t confirmed for Avengers 2, fangirls all over the world will cry themselves to sleep.