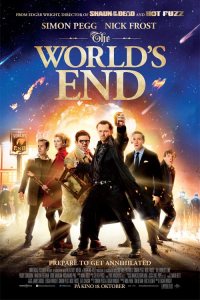 Simon Pegg and Edgar Wright grab Nick Frost for one last pub-crawl with the movie The World’s End, the last in the so-called Cornetto trilogy. I will admit I am a total fangirl for Shaun of the Dead and Hot Fuzz, but I was really skeptical if they could end the series with a bang.

The World’s End is a pub in the typical small British village of Newton Haven, where our boys grew up. On the last day of school, they tried and failed to complete the Golden Mile: a twelve pub pub-crawl, ending at the aforementioned The World’s End. So, some twenty years later the leader of the pack, Gary King (Simon Pegg) gathers the boys together for one last attempt. If you’ve managed to avoid trailers and other plot summaries, I urge you to keep doing that because the film is a lot funnier if what comes next is a surprise. I won’t spoil it here, but there is definitely as much action as the other two.

The idea of heading to a pub in stressful situations is hardly new in the world of Cornetto, and the film definitely continues in the same style and tone. It has that now very recognisable quick-comedic editing to show our boys in action, and as someone who enjoys it, I just sat back and enjoyed the ride.

The same goes for the characters to some extent. They have that loser quality of Shaun and our Hot Fuzz duo, but there are differences. Nick Frost plays the more serious guy this time, while Pegg comes off as a bit of a douchebag. Gary King is the logical end result of all these man-children we’ve seen in the previous films. The film explores the darker side of constant nostalgia – the idea that the best is behind you. It actually got quite dark for a second there, and I was surprised at just how good Simon Pegg pulled off those scenes. I wouldn’t be surprised if he got into more serious stuff in the future. But this is from the guys who made a rom-com with zombies where the protagonist is asked to shoot his mum in the head. If there’s one thing these boys can do, it’s turn the mood of a scene upside down with a snap of their fingers.

As usual, the camaraderie between Pegg and Frost transfers seamlessly to the screen, even when they’re fighting. The rest of the gang – especially Martin Freeman – are all funny. I wouldn’t say they are funnier than some of the sidekicks in the other films. I did like that the romantic subplot wasn’t Pegg-centric this time, but that also pushed it off to the side so much I’ve forgotten most of it already.

As for the antagonists (no spoilers), I think they’re somewhere between Shaun of the Dead and Hot Fuzz in that we don’t get an awesome villain like Dalton, but also not as instantly recognizable baddies like zombies. I did enjoy them a lot actually, and the action was very well choreographed considering none of these characters really know how to fight. Together with an awesome soundtrack, I had a blast.

The World’s End is a very fitting end for the trilogy. If you’re a fan you can just enjoy one last romp with the boys. It’s not better than the two previous, but I do like that it includes some darker stuff and takes a bit of umbrage with the portrayal of slackers in the previous films. The films all show us that can-do spirit that suddenly awakes in our characters in dangerous yet hilarious situations. And if these guys can get down the pub, then surely there’s hope for all of us.