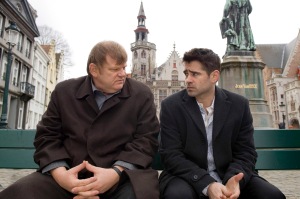 Another late night with Skype, another chance to show off great movies my sister might have missed. This time it’s In Bruges by Martin McDonagh, better known these days for Seven Psychopaths – which is on my list. I’ve seen In Bruges before, but somehow it never got reviewed. Here’s my chance to remedy that!

Ray and Ken, two Irish hitmen, get sent off to lie low in the Belgian city of Bruges while they wait for instructions from their boss, Harry Waters. Filled with guilt over a job gone wrong, Ray is doing his best to not enjoy the picturesque city while his partner goes sightseeing. The three guys are played by Colin Farrell, Brendan Gleeson and Ralph Fiennes respectively, and they are all at the top of their game. Farrell is particularly charming, in his neurotic, guilt-tripping, crazy sort of way. His ticks and frantic Irish cursing endear him to me more than what should be possible. In fucking Bruges, indeed.

Most of the brilliance of this film is thanks to the dialogue. It’s full of dark humour and 180 turns in mood, but none of it would sound remotely believable without these guys to grumbled it out.Ray’s fascination with “midgets” is hilarious, and when a film includes a scene with our boys snorting coke with prostitutes and a racist dwarf, you know you’re in for something a bit out of the ordinary. It even includes an insult that you might have seen from “great insult in movies” compilations on youtube. I won’t spoil it, but trust me: you could make a video from the cursing in this film alone.

The plot isn’t convoluted, however, though it definitely could have turned into one of those “too complicated for its own good” films. Rather, it feels like how any weekend in Bruges might have turned out if you were a hitman with only time to kill. Its simplicity does not detract at all, I think, and the ending is surprisingly thoughtful. By the end you will  definitely want to take a trip to (fucking) Bruges.

The film has a nice score, a beautiful setting and looks great from all angles. It’s not a big film by any means – you probably won’t remember it in years to come, but it does what it sets out to do. I highly recommend it if you ever have the luxury of not knowing what to watch one night. If you like snarky humour and a bit of heart in your bad guys, this is for you.