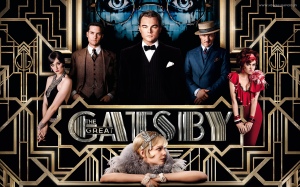 This summer has, so far, been a perfect storm of amazing block-busters, but the next big thing I had to see included no heroes, unless you interpret the title character very differently than I do. The Great Gatsby holds a special place in my heart, because it’s one of those books I had to read twice to “get”, and made me realise how unfair we are to children when we force them to read these books in school. At the same time, however, I am a firm believer that every movie needs to stand on its own.

The first sweep into this dazzling party world does inevitably feel like a pop-up book version of the original work. Fitzgerald’s flow hasn’t been translated as I expected. The rhythm is off, but the colours and lights soon blinded me to it, and slowly I began to read the movie’s language, and forgot the words on the page.

The inclusion of Nick Carraway’s writing process, however, spoils a lot of Luhrmann’s style and flow, and pulls us out just as we’re getting into it. Maguire manages the open-eyed Nick very well, but the five-o’clock shadow version sounds like a school-play by comparison. The biggest problem with these sequences is that they are simply completely unnecessary. Nick’s narration could have been included with only the first initial opening. His voice alone could remind us of the retrospective nature of the film without the stop and go motion the future sequences force on us.

Once we do get going, though, everything sparkles. You laugh at the over-the-top introduction to Gatsby, but DiCaprio’s constant “old sport” wears us down, and soon we are whisked away just as easily as Nick. The music is fantastic, the dancing hypnotic and the people empty – just as it should be. When the mystery of Gatsby starts to unfurl, we first feel he might be the only “real” person besides Nick, and possibly Daisy, in a world of shallowness. Their meeting is one of the most memorable scenes, and it plays out perfectly, and almost made me forget what fate had in store. Then the decent into Gatsby’s perfect past and Daisy’s carelessness begins, and as a film I think it works very well, apart from the aforementioned cuts into Nick’s future.

Some of the effects are too stylistic for my liking, but they go with the rest of the film and I enjoyed most of them. Through it all, DiCaprio keeps us grounded in the characters. I swear no on can rage like DiCaprio, and if he doesn’t get an Oscar soon, there will be riots. Carey Mulligan is great, but for myself I kept comparing her to Mia Farrow, who just hit the exact level of frivolousness.

Baz Luhrmann’s The Great Gatsby has a lot to recommend it as a film. I won’t even try to get into the comparison argument as I don’t think it has a place in a regular review. The film is probably too stylistic to appeal to everyone, but I had an entertaining time.

2 thoughts on “The Great Gatsby”