Since I haven’t been working full-time in the radio lately because of “real life” job movements and apartment hunting, I thought I might write about what I have been watching (all those late nights of not-having-a-real-job need to be filled). For some reason this winter season I have been watching a lot of TV.

Here are my recommendations!

Premise: Olivia Pope (Kerry Washington) is a fixer, and with her “gladiators in suits” she fixes whatever problems her clients have, no matter who they are.

At first glance Scandal appeared to me like yet another political show I wouldn’t get into, but I was willing to give it a shot. Political shows like this need quick writing, machinations worthy of Machiavelli, and ruthless characters you love to hate. Scandal has a lot of this, and more. In the middle of it all it has, rather surprisingly, a passionate love story. It’s certainly not for everyone, but I found myself liking it despite my usual cynicism. After a bit of a forced start, the two secret lovers get their chemistry right, though sometimes you do want to smack them both for being so stupid. Still, their naive desperation for one another is sort of endearing.

As for the White House Chief of Staff, Cyrus, he is the perfect politician, except that he’s gay and a republican. His stomach for manipulations left me reeling at times, and he only gets better in season two. The same can’t be said for all the characters, some of whom feel either misplaced or misused, or simply not up to the acting task. It’s a show that relies on chemistry to get that right pitch during those high-stake arguments, but some of the pairings just never click. Despite this, I do feel Scandal does a lot right, and it certainly doesn’t pull its punches when it comes to the biggest scandal of all.

Most shows up the ante as the seasons progress, and with the direction things are going in Scandal I pray they finish it on a great note with just the two, because I don’t see how they can go higher.

Why even bother, when we’ve already got the Most Perfect Show Ever in the form of the better named Sherlock? I hear you ask, as you should. Many have said that Elementary would be a half decent crime show if it just let go of the name Sherlock and went its own way, but I now think that would be a mistake. Half the fun with a new Sherlock show or film is the anticipation of how this new version will utilize the characters. Elementary has a legitimate claim to the Sherlock Holmes character. When watching therefore, leave the brilliant Benedict Cumberbatch in London.

Jonny Lee Miller plays Sherlock as a recovering drug addict, who while possessing a lot of the strange behavior that any version of the Detective exhibits, can still appear relatively normal. London-Sherlock seems oblivious about certain social norms or faux pas, but NY-Sherlock is well aware and simply deliberately ignores them to mess with people. He is also a tortured man, due to his own addiction and loss, which you learn more about with each episode.

That’s the key with Elementary, and why it can’t be just a decent crime show. It’s not about the crimes, though they do become more elaborate and significant towards the season finale, it’s about the relationships. Foremost among these is the one with fem!Watson, played expertly by Lucy Liu. Unlike Freeman’s (or Law’s) Watson, she doesn’t take Sherlock’s crap. Well, she has to, to some extent, but she also actually makes a difference in his life, instead of just sighing and accepting that in certain ways Sherlock will never change. London-Sherlock has development too, of course, but the change is not so forceful or deliberate as with NY-Sherlock. Watson is a sober companion here, and it is her job to help him recover.

Sherlock is the better show, I wouldn’t dream of arguing it, but that doesn’t mean you can’t enjoy Elementary. It’s a fascinating take of the story, and I look forward to it every week. In fact I’ve been enjoying 17 episodes so far. Take that London. 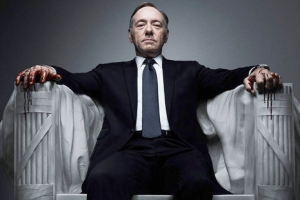 House of Cards (full season one on Netflix)

Premise: Congressman Francis Underwood uses his political know-how to manipulate his way all the way to the White House.

Another political show? I guess I do like them. House of Cards is Netflix’ own creation, and as such has done away with a lot of the stuff regular TV-shows have to have, like false-cliffhangers right before commercial breaks. It also doesn’t have a fixed episode length, meaning things take their time.

Ironically, it was the natural commercial breaks I missed. Most of the episodes are close to an hour long and sometimes this was too much. With Netflix it’s easy to come and go as you please of course, but finding a whole hour to spare could be difficult. The plot itself feels occasionally longwinded as well. Kevin Spacey is marvelous, and his asides to the camera are what you’re looking forward to every episode. Some of the writing, however, seems too easy. Women reporters sleeping to get a story is too cliché, especially when you can’t find a single relatable woman in the entire show, except maybe the White House Chief of Staff, Linda Vasquez, but she doesn’t show up much.

What made me watch all 13 episodes? Mostly, it the strange sympathy you can’t help but feel towards Spacey’s character. Underwood is a political animal of the highest degree, yet you still want him to win. You want him to look you in the eye with that smirk of triumph.

One thought on “What have I been watching?”