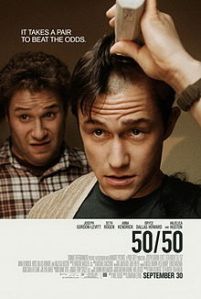 It was on The Daily Show I first heard about the movie 50/50. Seth Rogen was on, and he talked about how he and his friend Will Reiser wanted to tell a cancer story that was a bit different. Will Reiser himself had cancer, and drew on his experiences while writing. It shows in the finished product, especially in the dialogue. It’s personal and emotional, but also funny and truthful. The only downside is that it does seem to lack the depth it aimed for.

50/50 is the story of 27-year-old Adam (Joseph Gordon-Levitt) who finds out he has a 50% chance of surviving his spine cancer. The film follows the journey he takes through treatment, which he receives while he has girlfriend trouble, therapy, an overbearing mother, a father with Alzheimer, and of course his crude yet lovable best friend (Seth Rogen).

The acting and script are both really top notch, and both stars definitely let you hitch a ride on their fun, if occasionally dysfunctional, friendship. The girlfriend is refreshingly, utterly dislikable, and her exit from the story is cathartic. Angelica Houston plays the mother, and should have gotten more screen time. Unfortunately, Adam is like many young adults: annoyed at his mother’s need to nurture. Seth Rogen plays the character as he does best, and somehow I’m still not tired of his incredibly hoarse laugh. His constant optimism and crudeness make the serious bits hit home all the harder.

The movie does manage to drag you along the emotional highs and lows, but I felt like I was always two steps behind, and I could never really get up close. There were long, uninspired sequences of tired Adam sitting on the bus or just generally being sad, and I felt like a stranger sitting at the opposite end, sneaking glances and wondering what was wrong with the weird kid in the beanie.

I also have to admit the therapist-to-love-interest story line made me roll my eyes. The moment she, Katherine (Anna Kendrick) entered the room, I felt like someone had slapped me with a romance subplot. Thankfully, it plays out subtly and naturally, though I couldn’t quite get rid of my constant thought: “This is really unprofessional.” People of course, aren’t always professional, and I think the movie does a nice job of not ruining Kathrine’s credibility as a future doctor.

Cancer stories are always difficult, but shows like The Big C (I’m on season two right now) and movies like 50/50 remind us that people don’t drop dead the moment they get their diagnosis: they laugh, cry, work hard through their unique situation, and try to pick up girls by showing off their bald heads.