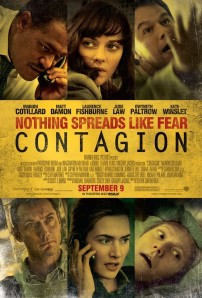 I had to take a few days to digest this movie because I couldn’t quite decide if I liked it or not. In the end I decided I liked it well enough, but that most of my enjoyment comes from my human fascination about the end of the world. Unfortunately, this movie isn’t really about the end of the world, but more a possible scenario. This might make it more real, and therefore more chilling for some, but personally I could have done without this level of detail. The movie gets a bit bloated, but pulls it all in by the end.

Contagion is basically the story of how a virus spreads through the population. The movie focuses on several story lines: the doctors trying to find the source and cure, a regular familiy dealing with the crisis, a political-activist who is convinced of a conspiracy, and a WHO official taken hostage so that a small village in China can get help.

Usually, I’m not a big fan of movies that try to juggle story lines. This is just a matter of personal preference. I just don’t think the media lends itself well to telling multiple stories. While I know people argue it’s been done well several times, I rarely enjoy these examples. So it came as quite the surprise that I wasn’t immediately put off by the jumping back and forth between stories. It’s basically the only form of momentum the movie has, and without the hurrying back and forth between the characters, the only thing it would have to convey excitement is the over-the-top dramatic music.

The music I actually did enjoy, and like I said it does give the movie much of its sense of urgency. How else would you make a virus scary? Well, there’s the sick people, and the eventual piles of bodies, but that takes time to get to, and the movie paces out the scares really well. It builds up slow, but at the same time manages to convey how quickly things move even within usually slow-moving governments and big organizations.

People love apocalyptic movies, and this gives you a lot of that “every man for himself”-response, and because the threat is so realistic it hits that fear dead on. The ending especially leaves you with a spine-tingling feeling. If you watch this movie and are in doubt like me, I guarantee you’ll decide it was worth it based on that last sequence.

Despite my love for the slow build-up, I do think the movie could have cut a few corners. There’s only so many times I can watch people in blown-up hazmat suits walk down an identical hallway and do unexplained science-stuff. The kidnapping story could have been cut entirely without anyone really noticing. By the time we got back to that particular plot I had forgotten all about it.

This type of movie, I think, needs the cinematic experience to really convey its gravitas, but I’m not sure it deserves to roll a 5 (recommended cinematic experience). I’ll give it a strong 4. I do highly recommend watching it with a nurse or someone in the health profession who you can look over and receive a serious nod from whenever you’re in doubt about whether this or that is a likely scenario. It just gives it that extra creepy feeling.

In conclusion, Contagion gives you chills, but makes you wait patiently for them. You’ll have to decide your own level of patience before you give this movie a fair roll.